Task:
Students will conduct an investigation on endangered rivers in British Columbia and write proposals for alternative solutions on how to save the respective rivers.

Activate Prior Knowledge:
Students complete a mind map activity entitled ‘The Many Ways People Use Water’ found in the McGraw-Hill Ryerson textbook BC Science 8 (page 359). While completing the activity, students should focus specifically on what human activities impact river and lake systems.

Predict and Question:
In Canada, there is a plentiful supply of water and we rarely pay attention to how much water we use in our daily lives or how our actions impact local aquatic areas like rivers and lakes.

What are the students wondering about how human activity has impacted their local rivers, lakes and oceans?

Having viewed the video above, students need to share their ideas from the video Graphic Organizer (A/B partner recommended). Teachers ask student pairs to share their main ideas and generate a list of ideas and evidence on the board or overhead. Teachers lead class discussion on the significance of the ideas generated (and those not generated) and how federal policies have impacted the environment and Aboriginal people on the Columbia River system.

Now that students have learned how federal policies and human activity have impacted a regional river system (Columbia River), students will now conduct an investigation on how to save other endangered rivers in British Columbia. Working in A-B partners or groups of four, students conduct an investigation activity found in the McGraw-Hill Ryerson textbook BC Science 8 (pages 444-445). Using the chart provided on page 445 in the textbook, students will choose a local river (or river of their choice) to research and write a proposal to save an endangered river. Student groups report out their proposals to the class in the form of an oral presentation, using either poster boards, written reports, or Powerpoint presentations.

Upon completion of the investigation activity, students complete a Reflection Sheet to reflect on what they liked/disliked about the investigation process and how their thinking towards how Canadian Federal Government policy impacts the environment and Aboriginal people has changed.

Students can complete a research report on these and other issues affecting the environment and Aboriginal populations in Canada.

Students will select one animal from a local ecosystem and create a presentation that represents their understanding of food chains and food webs.

Discuss the following vocabulary and brainstorm ideas of the respective definitions on the board.

Predict: Discuss the difference between food chains and food webs and predict what would happen to a local ecosystem food chain if one element was removed.(A/B partner talk suggested)

Distribute the Krill Grill Record Sheet and play the game Dining at the Krill Grill. Students record results of the game on their record sheets. Discuss the questions at the end of the activity to reinforce understanding of food chains.

Video: Students watch the following video and use a What’s Important and Why sheet to highlight five keys points that focus on land stewardship. 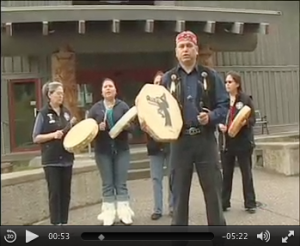 Students will select one animal from a local ecosystem and create a presentation that represents their understanding of food chains and food webs. For example, a poster could be created with a food chain on one side and a food web on the other. Other possibilities include a Powerpoint presentation, drama presentation, modifying the Krill Grill game to one’s local ecosystem.

Students discuss what stewardship initiatives are in place in their local region/province/country and write, on the back of their video sheet, three ideas of how they can assist these initiatives.